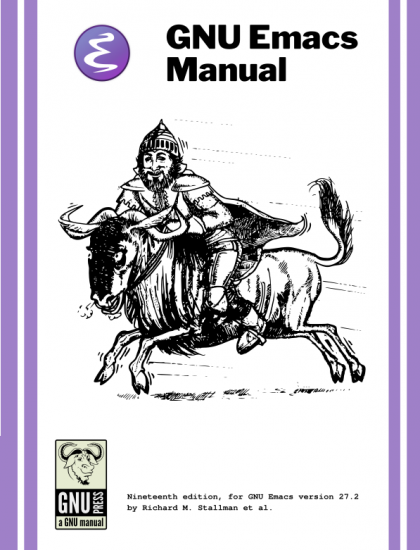 GNU Emacs is much more than a text editor; over the years, it has expanded to become an entire workflow environment, impressing programmers with its integrated debugging and project-management features. It is also a multi-lingual word processor, can handle all your email and Usenet news needs, display web pages, and even has a diary and a calendar for your appointments!

The ability to:
Create PostScript output from plain-text files (special editing modes for LaTeX and TeX are included).
Compile and debug from inside Emacs.
Maintain program ChangeLogs.
Flag, move, and delete files and sub-directories recursively (directory navigation).
Run shell commands from inside Emacs, or even use Emacs itself as a shell (Eshell).
Enjoy the use of extensive merge and diff functions.
Take advantage of built-in support for many version control systems, including Git, Bazaar, Mercurial, Subversion, and CVS.
And much more!

About the original and principal author:

Richard M. Stallman developed the first Emacs in 1976 and wrote GNU Emacs in 1984/85. He has received the ACM Grace Hopper Award, a MacArthur Foundation fellowship, the Electronic Frontier Foundation's Pioneer award, the Takeda Award for Social/Economic Betterment, and the ACM Software and System Award, as well as several doctorates honoris causa.